Headlines and talk show jokes pervaded last week, screaming about the latest research in the USA claiming that being #single is now the “norm” for adults for the first time. What are the benefits and costs of this #solitude? What about increasing social #isolation, especially for #Seniors?

from Bloomberg news, we get these insights and facts:
“Single Americans make up more than half of the adult population for the first time since the government began compiling such statistics in 1976….[That is] 50.2 percent of those who were 16 years or older, according to data used by the Bureau of Labor Statistics in its monthly job-market report.”

More specifically: “The percentage of adult Americans who have never married has risen to 30.4 percent from 22.1 percent in 1976, while the proportion that are divorced, separated or widowed increased to 19.8 percent from 15.3 percent…”

Among other results of this change, “this exaggerates income inequality…” This worries and affects me and should concern us all in the USA. When so many for so long are un- or under-employed, living on fixed incomes that are unable to cover necessities and bills, we are ALL living in economically unstable situations and we ALL pay.

For their full article:
http://www.bloomberg.com/news/2014-09-09/single-americans-now-comprise-more-than-half-the-u-s-population.html

From another source, we get these “spins” on the topic: http://www.feelguide.com/2014/09/11/the-united-states-of-bachelors-single-people-now-make-up-more-than-50-of-u-s-adult-population/

“The United States Of Bachelors: Single People Now Make Up More Than 50% Of U.S. Adult Population” and “…there’s new research which indicates that being single can have enormous benefits on your wellbeing.” 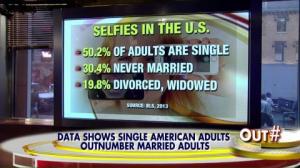 Clicking on that link brings us to this headline and the real link for its list. http://www.feelguide.com/2014/02/17/the-top-5-scientific-reasons-why-being-single-is-good-for-your-mind-body-and-spirit/

“The Top 5 Scientific Reasons Why Being Single Is Good For Your Mind, Body, And Spirit” [with its own sources for each of the points in the article; link below this list, here]:

One of the correlations to being single, and in my and others’ opinions, a chief reason that being single is more popular, feasible and enjoyable now than ever? The use of social networking sites, especially via internet accessing devices such as phones and tablets, is higher than ever and rising among adults in the USA. Can’t be a coincidence.

I am astonished by these stats, which are the highest for FACEBOOK: 76% of adult females and 66% of males online use Facebook! In the age group of 30 – 49, that total is 79%! Even in rural and suburban areas, that figure stays around 70% and higher. In older age groups, that percentage is still quite high: among those ages 50 – 64, 60% are using it, with 45% of Seniors using Facebook.

There has been a meme going around that shows various faces or graphics with these words: “I just spent the day on Facebook instead of being with people” or words to that effect. Truer than ever, now, for most adults, it seems.

Singlehood may be beneficial for many, especially women (many research studies have pointed this out repeatedly in recent years) but social isolation is not beneficial and is increasing, with extremely negative results for Seniors (mostly women) in the USA. 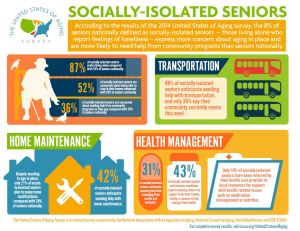 Being alone does not equal being lonely. Being single does not equate with being unhappy. Okay. Got that. I and many others could fill many blog posts with personal stories of poor relationships’ escape stories, relief at being single, joy in alone time, happiness while on our own.

I have been saying for years that my “chooser” must be broken and therefore, I’m finished with choosing an intimate partner and happier being on my own than in another wrong relationship. If a suitable partner finds me, that might work. But my being the chooser? not going to happen again. I therefore firmly agree with the “not settling” part, above, for myself.

In a major life change spurred by many factors (personal, economic, familial), currently, as many of you know, my mother and I started sharing her condo a few weeks ago. This takes care of many of both of our social and other interpersonal needs just fine. We have our own time and our together time. We help each other and we leave each other to our own devices. We are fortunate to have rhythms and personalities that mesh well.

But, there are actual social and other needs for many adults in the USA that require interaction and assistance from live humans that are largely going unmet, especially for Senior women. What are we as a nation going to do about this? Comments and suggestions, here, please. 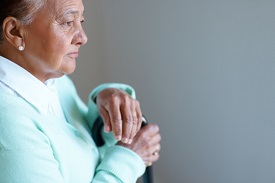