According to many researchers and recent research in both the UK and the USA, fewer than 6%, and many say closer to 1% of the general population actually suffer from #Celiac disease, which does make humans unable to digest gluten. In fact: “Ninety-nine percent of individuals [this doctor sees] who report gluten sensitivity, however, do not have celiac disease….”

What did they discover about self-diagnosed gluten sensitivity?

“The placebo effect is much greater for subjective symptoms (such as those of patients with self-diagnosed gluten sensitivity) than is appreciated. It is seen in 20% to 40% [of] individuals. That is, of patients who report an improvement in symptoms by eliminating gluten, 20% to 40% are NOT improved. They THINK they are improved….[A]lmost all have had their symptoms return or continue with reduced severity despite continuing the [gluten-free] diet.”

Back and forth we go, with individuals making great claims at parties, schools, family dinners and restaurants about their inability to digest gluten despite not having been diagnosed formally with Celiac disease. People around them are getting frustrated, with good reason.

What are we to do, then, we who want to support our loved ones and help them be healthy, feel good, not feel negatively judged by us?

This is a dilemma, because it is difficult to determine what is causing these people’s symptoms when they do not have actual Celiac disease or wheat allergies. A number of causes could be in effect, in varying combinations, some of which cannot actually be proven to exist in each person other than through dietary trial-and-error, which, as we have seen, often fails to provide factual data due to psychological interference.

“Unlike wheat allergy and coeliac disease, gluten sensitivity does not have a known set of biomarkers — doctors can’t tell if a patient is suffering from [gluten sensitivity] by examination (although there is a blood test, it doesn’t give accurate results for many patients). So [gluten sensitivity] can only be diagnosed by first ruling out other diseases and then trying out a gluten-free diet.”

Okay. So, we tolerate our friends, relatives, co-workers and neighbors as they attempt to figure out what is causing their discomfort, bloating, gas, pain, etc., but our patience is wearing thin, isn’t it? We may think that their self-diagnosed gluten problems are just the latest in a string of dietary and health fads that cause attention-seekers to become obsessed and challenging to be around, for the rest of us, don’t we?

Similar to the “fat-free” trend, which caused many to over-eat the so-called “fat-free” foods while clearly gaining weight due to ingesting extra calories, not in the form of fats and oils, but still getting a lot of carbs and sugars, gluten-free is no solution to weight problems, either.

“‘If you go on a gluten-free diet, taking substitutes like gluten-free beer, pasta, cookies and so on, if anything, you gain weight. If you take a regular cookie, it’s 70 calories. The same cookie, gluten-free, can go as high as 210 calories. You have to substitute gluten with something that makes that cookie palatable, so you have to load it with fat and sugars. Just consider that. A gram of protein is four calories, a gram of fat is nine.’

“But, [Fasano] adds, it may be possible to lose weight on a gluten-free diet by choosing natural products like fresh fish, meat, vegetables and fruit.”

To add insult to injury, gluten-free products are pricier than ordinary versions of the same foods.

Maybe the answer, for weight loss, is to eat foods that are both fat-free and gluten-free. Of course, those are also likely to be taste- and flavor-free. Take away the MSG, too, and you may as well drink water or eat cardboard.

Summary
Should we or shouldn’t we eat gluten-free, then?

First, how difficult is it to eat gluten-free? VERY, but getting easier.

“To avoid gluten, you have to stay away from all wheat-based foods and ingredients, from white and whole-wheat flours to kamut, spelt, semolina, and wheat bran and germ.

Second, who benefits from a gluten-free diet, besides those with verified Celiac disease and/or wheat allergies?

“[P]eople who say their symptoms improve on a gluten-free diet may actually be reacting to another set of carbohydrates in wheat called called FODMAPs (Fermentable Oligosaccharides, Disaccharides, Monosaccharides and Polyols). In other words, it’s not the gluten that’s bothering people, but other sugars found in wheat.”

Third, be cautious. There is evidence that people who follow this diet who do not need to be on it and who do not track the supplements they’re missing out on and replace them could be doing themselves more harm than good.

“‘People who follow a gluten-free diet may have low levels of certain vitamins and nutrients in their diets.’ These include iron, calcium, fiber, and folate. ‘Along with fruits and vegetables, the most common sources of dietary fiber are whole-grain breads and cereals, which contain gluten,’ the University of Washington’s gluten-free primer states. ‘Many people on gluten-free diets tend to eat inadequate amounts of fiber, which may lead to constipation.'”

Also, we now know that we need certain types of bacteria to flourish in our guts/intestines, and when they do not, we can suffer greatly everything from indigestion to depression, many worse problems than bloating. “Going gluten-free may also reduce the amount of beneficial bacteria in your gut, which has implications for immune system function.” 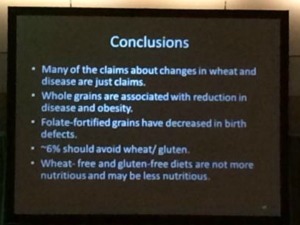