Today is the anniversary of the birth of our wonderful son, unnamed at the time and for 20 more days, was born. I became a mother and you became an actual human after swimming around in my imagination for many years and in my womb for nine months. SO GLAD!

So, later in May the year of his birth, our son became Merlyn Timli 0 Ember. We gave him in his name the middle figure of “0” (which is a zero, not the letter “O”) to be a placeholder, awaiting the day he might want to choose his own name. True to his independent and somewhat contrarian nature, when he decided what he wanted to do with his name, Merlyn deleted the zero.

“Merlyn” means “Child of the Light,” and “Of the Immortals.” We chose to give him the original Celtic spelling and used those meanings.

“Timli” is a name his dad, Christopher R. Briggs Ember (or, now, Ember Briggs) created, and the definition of this invented name is “He who paints in the sky with his fingers.”

“Ember” is the name Christopher and I chose to take on, adding it to our own names so that Merlyn’s surname could be “Ember.” The Ember Days are the days of change, the two or three days before and after every Solstice and Equinox. This name seemed apt since having a child (our first and only) certainly began many days of change for Merlyn’s parents!

Merlyn in the cradleboard Emmy Rainwalker made for him, with his parents, May, 1980

[NOTE: Laws in New Hampshire at the time dictated that unmarried women could only give our children our own surnames, and I had no wish to give Merlyn my birth name. So, we chose a new surname for our new family. Christopher and I were deliberately and consciously unmarried, calling ourselves “Partnered,” for several reasons: lesbians and gays could not marry at that time; women became men’s property in New Hampshire when married in 1980; and, we both were marriage-averse for individual/personal reasons.]

I am so grateful that Merlyn’s birth occurred intentionally (and quite fortunately) at our rented home in Stoddard, NH, attended by three lay midwives: Katie Schwerin, whose family lived as housemates of ours and are still our good friends; Emmy Rainwalker (Ianiello), who was a former housemate and good friend; and, Cindy Dunleavy, the “senior” midwife who had trained Katie and Emmy and became our good friend. 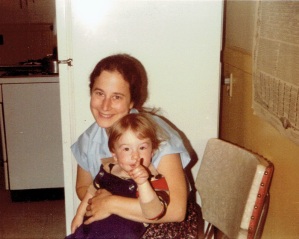 We personally knew and/or were related to a total of over twenty children born within one year of Merlyn. He has cousins one year older and one year younger than he is on both sides, and he was born into what felt like an exploding baby boom, a loosely-knit but connected network of families with children around his age. He grew up in collective households with housemates who often included other children and in close connection with several in particular with whom he is still close as adults. We had buying clubs (food co-ops’ predecessors) we belonged to in several towns nearby for collective purchasing of bulk, organic and healthy foods and supplies. We exchanged childcare, kids’ clothes and baby equipment, recipes, chores, tools and handiwork. We celebrated birthdays, weddings, holidays and other occasions at one another’s houses, often ours.

These other families and their children became our extended family which included children who were students at public and Waldorf schools as well as homeschoolers; Merlyn was all three at one point or another.

Some of the places we lived right before and after Merlyn was born had no electricity or running water (or even walls). We played board and card games, invented and actual sports games. Most of us intentionally had no televisions or war toys. We put the non-TV-watching time to great use.

We READ a lot! We put on plays, played music, talked a lot with each other, rode bikes, ice skated, sledded, swam, cooked and did “kitchen opera,” made costumes, hiked, walked, repaired, recycled and re-used (long before it was required), spent time in Finnish/Dutch-type saunas and Native American sweat lodges, canned and preserved food and herbs, sang and drummed and worked in ever-changing configurations of children and adults together.

Merlyn, you have become an amazing adult: kind, compassionate, intelligent, capable, worthy of and earning respect and admiration from colleagues, employers, bandmates, friends and peers. I am very proud to be your mother!

I hope, on this anniversary of the day of your birth, in your first year since 1999 of living back in the town you spent most of your growing-up years, that you and your sweetie, Lauren, celebrate in multiple ways with friends and your dad. I wish for you to enjoy a great birthday and many more, healthy, happy and prosperous ones to come!

I love you! Thanks, again, for making me a mother! 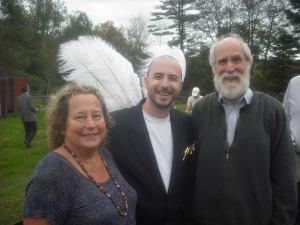 5 thoughts on “Happy Birthday to our Son, Merlyn T. Ember!”

My Tweets
Join 7,888 other followers