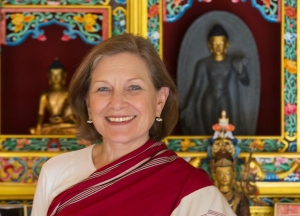 is the American-born widow and former student of Chagdud Tulku Rinpoche who was ordained as a lama as well.

I have been with her many times for teachings with her as Rinpoche’s translator and with her as the teacher. For those who don’t know, Chagdud Tulku Rinpoche passed in 2002, but he was my first empowering lama and my root lama’s, Padma Drimed Norbu (Lama Drimed)’s root teacher.

I first learned P’howa (the practice that includes transferring consciousness intentionally at and after the body dies or helping others do that, including those who are brain dead, already dead, or dying/dead animals) from Chagdud Khadro at a three-day event I organized for Chagdud Lhundrup Ling (A dharma center I helped start) in Maine in 1997: she was fabulous. I had the good fortune to attend several other teachings she gave or translated for Rinpoche or rituals she attended as a lama in New York, New Mexico and northern California between 1997 – 2007. I keenly appreciated her humor, knowledge, insight and compassion.

If you live near or can get to any of these events, these teachings and rituals are rare and precious. They are in the Tibetan Vajrayana Buddhist tradition but made accessible to Westerners who speak English. Well worth your time if you’re already a practicing #Buddhist, a meditator or interested in #Tibetan #Vajrayana #Buddhism.

Spread the word! Donations requested; no one turned away for lack of funds.

Looking into the Mirror of Death to Find Purpose in Life and Peace in Dying
La Jolla, CA
July 11
robertrosson2000 @ yahoo DOT com

Looking into the Mirror of Death to Find Purpose in Life and Peace in Dying
at Rangjung Yeshe Gomde – Cooperstown, NY
August 20 – 21
More Information: http://gomdecooperstown.org/august-20-21-chagdud-khadro/

Looking into the Mirror of Death to Find Purpose in Life and Peace in Dying
Syracuse, NY
August 22, 7 – 9 PM
More Information: http://chagdudgonpa.org/wp-content/uploads/2016/06/Syracuse-Flier-Khadro-2016.pdf