This is a repost from 8/27/13, since so many new readers are finding The Spanners Series, especially This Changes Everything, Volume I, after its PERMAFREE status began 4/1/14 and have asked for a Glossary.

In the back of each Volume, I do update and add to the Glossaries, but here you go:

Toughness = how much energy a material (or person) can absorb without breaking. As carbyne’s toughness becomes well-known in the early part of the 21st century on Earth as both the material used most in space travel and interstellar communication (reacts best in temperatures 25º C or lower), carbyne’s toughness becomes the metaphor best understood as the way to describe my experiences as the Chief Communicator. Carbyne is stronger than steel or graphene, thinner yet stiffer than any other form of carbon, including diamonds, and lighter as well; most importantly, carbyne can be “grown” as well as mined.

Fragmenters (“Fraggers” who “Frag”) = Usually Earthers; opposite of well-meaning Spanners. Fraggers disintegrate, pull apart, ruin cooperation, destroy unity, incite conflicts and disagreements, refuse to compromise. They are Conservatives, fear-mongers, and nonbelievers despite ample evidence. They are fundamentalists, entrenched, hence, the Trenchers are their extremists. Being Fragged involves having an individual Fragger or a group of them interfere with and/or ruin Spanners’ plans for peace, harmony, multiverse travel, ESP trainings, intergalactic travel, etc. Can even be used when no Fragger is involved, much the way current Earther humans talk about Mercury’s retrograde status as the “cause” of problems with travel, communications, and planning.

Trenchers = Usually Earthers; extremists among the Fraggers, ones most difficult to deal with. Known for digging in, refusing to listen to reason or information that contradicts their views, being Reactionaries, resorting to violence, abusing dark psi and using other nefarious means (kidnapping, murdering, sabotaging, causing harm in other ways) to prevent the Transition or success of Earth’s inclusion in the Many Worlds Collective or cooperation with the InterGalactic Council and any other worlds’ representatives. Being Trenched involves being sabotaged, kidnapped, murdered, or otherwise seriously harmed by a Trencher or a Fragger.

Psi-Warriors = PWs; Not always Earthers; those with exceptional Psi skills and abilities, with or without the MWC (Many Worlds Collective) ESP(Excellent Skills Program) training. From Spanners’ perspectives, PWs are on the “right” sides of these conflicts, ones who utilize their powers to fight Trenchers and to persuade (sometimes not ethically or properly) Fraggers to alter their opinions. Psi-Wars/Fights/Battles are between PWs and Psi-Defiers.

Psi-Defiers = PDs; ironically, while claiming not to believe in Psi, PDs utilize it as their chief weapon. PDs are usually Earthers, but can be anyone with exceptional Psi skills and abilities, with or without MWC ESP training program. PDs utilize (some say abuse) their powers to oppose Spanners and especially PWs (and other pro-MWC-ers). Spanners view PDs as being on the “wrong” sides of these conflicts. Can sometimes persuade (usually not ethically or properly) by including invading dreams, sowing doubt and fear, and indoctrinating children, others to their cause and gather more Fraggers and Trenchers. PDs are often already Trenchers, so they claim religious freedom, grace from their deities, and other bases for their powers and positions.

OverSeers = OSes (pronounced Oh Essess); those (not usually Earthers, although more join as Earth’s involvement in the MWC continues) with top-level ESP training within the MWC, like the Secret Service for the IGC (InterGalactic Council), who monitor, regulate, and protect members of the MWC from threats, using Psi as well as more conventional methods to control Fraggers, Trenchers, and Psi-Defiers all around the multiverse. Ultimately, OSes can banish intractable enemies of peace and harmony to specifically designated multiverse timelines to keep them there where they are unable to cause further harm. This becomes the way to imprison/sequester the worst criminals, who can’t be rehabilitated, until they Return or are Reinvolved.
OSes include the investigators (OSIs, pronounced OhEssEyes), enforcers (OSEs, pronounced OhEssEes), and espionage/covert ops teams (OSOps, pronounced OhSops) each with their own “stars” in The Spanners Series (mostly in Volumes III, IV, VI and IX).

Sequestering = <strong>Qing (pronounced cueing); the ultimate punishment, deemed necessary when enemies of the MWC refuse to reform and are violent threats to peace and harmony. Qing involves sending individuals or groups to the MWC’s prison-type multiverse timeline, until they Return. Often referred to as being Qed (pronounced cueued), when someone is relegated to one of these timelines as their punishment. OSes (pronounced OhEssess) often use references to Qing as a threat to get information during investigations.
Reminds many Earthers quite negatively of tactics used by secret police in many totalitarian regimes, such as for South American countries’ disappeared, USSR’s sending political prisoners to the Gulag, or USA’s use of “extraordinary rendition” and imprisonment in Guantanamo, all without any legal process. Therefore, Sequestering is very closely monitored.
Decisions for an individual to be Qed must be determined by many judges, with regular imprisonment, first, while awaiting confirmation that Qing is the only option left to preserve public safety (much like the death penalty process, when that was still in use). Or, if you’re a “Warehouse 13” TV show fan, like having a villain “bronzed,” or, if you’re a “Superman” movies fan, similar to the exiling of the criminals who attempted a coup right before Krypton exploded.
Communication after being Qed is quite limited; no former friends or family members have regular access to those who have been Qed. All communication must be pre-approved and go through certified Q Communicators, who are able to timult and communicate with those in alternate timelines. Once an individual has been Qed, s/he never comes back into this timeline until their Return or Reinvolvement. Like reincarnation, Return involves dying to release one’s consciousness out of one’s current physical form, then coming back intentionally in an Earther’s or other form, for a new life, restarting at birth or that form’s beginning stages, to benefit beings; Reinvolvement is more random and carries with it opportunities for improvement of oneself, mostly). 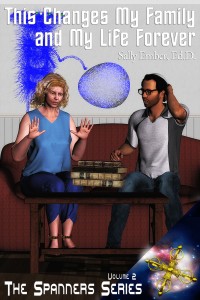 Psi-Penalty = Psi-P; the “price” that I, as the Chief Communicator, and others must “pay” when utilizing ES (Extraordinary Skills) to timult as we discover that we must choose between personal satisfaction or temporary happiness and more lasting, global harmony and peace (Psi-P is the main reason I am not with Epifanio in many timelines). Psi-P reveals a trade that must be made, but it is often made with great sorrow, sacrifice, honor and integrity. Sometimes the Psi-P is known only to the one paying the price; sometimes, others know or are told; some Psi-Ps are quite public, especially during Transition, so most Earthers know a Psi-P is sometimes necessary.
I often mourn or complain by saying that I’ve been “Psi-Ped” (pronounced sigh-peed) whenever I most miss Epifanio.

Am I the only author who is reluctant to finish a book? In Stephen Sondheim’s depiction of Georges Seurat in Sunday in the Park with George, his song, Finishing the Hat, eloquently and poignantly describes this exact chiaroscuro-type emotional state.

We artists, writers, creators enter and create “the world of the hat” “where there never was a hat” and then have to leave it (temporarily, and then, forever, in the case of a series of novels or works). I feel both proud and sad, both happy and relieved, both excited and frightened to go forward.

Writing is the best part. I hate to end it.

I am dragging my literary feet; I have had an unfinished near-the-end chapter of This Changes My Family and My Life Forever, Volume II of The Spanners Series, for two weeks. Well, I was away and “couldn’t write” for a week (really?). Home for two days and still couldn’t make myself finish it.

Until a few hours after I drafted this post, yesterday afternoon: finished and sent off my draft to two beta readers.

Writing this post helped make the finishing occur, somehow. I explained and confessed my hesitation to complete my work. Then, I had no more excuses or barriers.

The hat must be finished.

I am already thinking frequently about Volume III (the next hat), This Is/Is Not the Way I Thought Things Would Change.