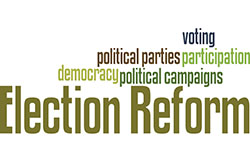 The USA “primary season” is ridiculous, if only a few million people get to decide, and so much money and so much time is wasted “up front.”
This is the 4th election in a row that “my” state’s primary ended up with almost no candidates left to vote for (and “mine” was eliminated). WTF?

Please put your thoughtful, respectfully worded ideas in the COMMENTS.

Primary season reforms :
——No one can “buy” their way into a debate or onto a ballot; donor types and total money raised are not relevant nor counted towards eligibility for debate participation or ballot inclusion
—We need to have ALL the primaries held within a few weeks of each other, perhaps all in March or April
—NO ONE IS ALLOWED to drop out of any race, once on a ballot, except for legal (criminal indictment) or health reasons, until all votes from all primaries have been counted
—NO MORE “caucuses,” either, since that system is based on a racist bunch of BS that excludes most voters in those states, anyway
—No candidate is allowed to outspend the lowest-spending candidate in any given primary, with all money accounted for and transparently received (from WHOM) and spent, tallied daily
—The entire “primary season” should be fewer than 6 months, from start to convention, allowing 4 months for campaigning, one month for primaries, and one month between final primaries and convention
—ALL legitimate party candidates are eligible to be selected during that party’s the convention
—No promises can be made to any candidate prior to the final election as to getting picked for Cabinet, appointed, judiciary, or other positions until after the election, and certainly not as a trade for dropping out of an election’s primary or ballot.
Major election reform:
—No more “super” delegates (only Democrats have this BS, anyway)
—No more electoral college: one vote counts as one vote
—ALL polling places are to be kept open/re-opened for ALL elections
—Polling places are required to exist and be open for 3 days before and on election day, for every election, in EVERY USA state and territory and its counties/parishes, with more than one place per region in those with difficult-to-traverse areas and/or populations that require it
—Voters should not have to wait in lines should take voters longer than one hour to vote
—No more voting machines. Period. All paper ballots, everywhere, always
— All legitimate state ID is accepted for voting, if ID is even required
—I’m open to NOT having ID required, since that disenfranchises some voters, and since “voter fraud” is a non-existent “problem”
—No registered voters are EVER to be “purged,” removed or eliminated from eligibility prior to ANY election, all such purged are to be immediately restored, since the “reasons” given for any purging are always bogus, anyway
—No VISIBLE electioneering allowed, no matter how many feet away, at any polling place: no signage, no banners, no petitions, no people asking questions of voters prior to or after voting, no one standing around wearing candidates’ or issues’ regalia, no confrontations of voters, no pressure of any kind to vote any particular way, ever, anywhere
—No “exit polling,” and, therefore, no influencing future voters by first voters by the media
—No public or online speculation by the media as to who or what lost/won until ALL voters have voted in every USA region
—No announcing “winners” or “losers” and no “concession speeches” or conceding until ALL votes have been counted, including absentee ballots, which takes days or weeks after each election
—No one who is running can manage that election (e.g., Georgia’s fiasco)
++++++++++++++++++++++++++
To get involved, to donate, and/or FMI:
Stacey Abrams (who never conceded…), is operating Fair Fight, which focuses on improving voter access and restoring voting rights: https://staceyabrams.com/vision/voting-rights-public-integrity/
The Brennan Center for Justice provides Voting Reform efforts and info: https://www.brennancenter.org/issues/ensure-every-american-can-vote/voting-reform
Fair Vote proposes many reforms, including Ranked Choice, offers the Wasted Votes Tracker, and much more: https://www.fairvote.org/
Watch Rigged: The Voter Suppression Playbook: https://www.riggedthefilm.com/
Learn more about Approval Voting (Ranked Choice, elsewhere); https://www.electionscience.org/approval-voting-101/?gclid
And, why have only two political parties that are viable in such a large country, anyway? https://foreignpolicy.com/2019/10/19/us-democracy-two-party-system-replace-multiparty-republican-democrat/

—Public factual databases about candidates in easy to find places ex voting record if they are a congressperson, their own policy statements

—Polling locations can be moved with 6 months notice and the notice given very publicly in many forms.

—Voters who are confirmed by a medical professional to have died, can be removed from the voter rolls within one month of their death or their published obituary. (Individual voters who are dead may be removed around their time of death. No purges needed.)

When a voter registers to vote in a new place because they have moved, the new place can contact their previous city or town so they can be removed from the voter list.

—Voting machines can be used where they help people with disabilities to vote. The voting machine shall up produce a paper ballot that can be counted with the other paper ballots. Paper ballots are counted by optical scanning and are kept for possible hand counting. All election electronics are kept off of the internet at all times every day of the year.

— Ranked choice voting in primaries. No announcement of how candidates did in any primary until all primaries have been held. Exit polling is allowed if done by UN election monitors and kept confidential until all votes are counted. If someone is not able to get to the polling place and hasn’t done an early voting or absentee ballot ahead of time, two justices of the peace will bring them a ballot at their home or wherever they are so they can vote (if they’re sick or their car breaks down or whatever). This last one is practiced in Vermont.