As most of you know, I am moving cross-country this week and spent the last month giving away almost everything substantial I own. By the time I leave, I will have shipped only 5 cardboard boxes and filled just my car (including my sister and HER carry-on bag!).

My mid-Swis, Ellen, and I are driving (after she flies up from LA to Oakland) from northern California to St. Louis, MO, where I will live with our mom. I grew up about 10 minutes from where my mom now lives.

I have had the BEST time arranging for where my “stuff” would next live. Friends, family members and then, strangers arrived in a steady stream to peruse and take things almost every day for the last three weeks. This relinquishing has been poignant, fun, interesting and a bit strange. I actually like to watch “my” things walk out the door, one by one (or by the bag or box), quickly becoming someone else’s possessions.

One of the last things to go (and I wasn’t sure I’d get anyone to take it) was my 5′-round, plywood table and its iron stand, which lived outdoors for the last 18 months.

Please read these emails to find out its story, then look at the photos.

Life can be very sweet!

One bit of background:
After Gina and I emailed back and forth a few times, it was determined, based on all of our schedules, that Gina’s father and Ryan, Gina’s financé, would come to get the table on Friday, mid-day, two days before I left. Ryan and Gina are about to be married.

I told them a few things about the table as they circled it, preparing to move it. As Ryan and his father-in-law picked up the tabletop to carry it to the truck, I asked Ryan: “How are you going to use the table?”
Ryan told me: “We are going to use it for our wedding!”
I smiled and asked: “And then what?”
He replied: “Then, we’re going to keep using it!”

My father and I got right to work on the table. I attached some photos of the finished top and primered legs.

We will take great care of the table for you.

This makes me so happy!

Thanks so much for taking care of, fixing up and bringing our family/community table which hosted, from 1982 – 2013, countless holiday, birthday, graduation and other rituals’ parties, costume-making and other crafts and arts projects, games’ and toys’ foundations, family meals, work project meetings, tutoring sessions and homework/homeschooling (this table was even featured in the local newspaper in Keene, NH, in 1986, showing my son and me playing an educational game during a homeschool lesson!) into your lives and ceremonies.

This table started out on Court Street in Keene, New Hampshire, in 1982, our family’s first collective households in Keene. It was mounted on a tall barrel that was temporarily filled with fabric; the top was made to be removable so the co-maker, Bonnie, who was doing many sewing projects, could utilize the fabric. We were low on storage space, so, there it was! We celebrated our son’s 2nd birthday and many others’ birthdays in the three years we lived on Court Street with several housemates. We had Thanksgivings, Chanukahs, Christmases and other parties there.

The table came with us in 1985 when we moved to Leverett Street and then in 1986 when we moved to Water Street, also in Keene. We stayed on Water Street for 12 years. During that time, both my son and I had two graduations, each (my master’s and doctorate; his 8th-grade and high school), dozens of birthdays of our families and others, up to 11 people around it for holidays and other parties.

The barrel eventually dried out/fell apart despite many years of repairing and re-circling it with extra metal bands, so Christopher found/made its 4-legged, removable iron stand.

A fledgling Assisted Living/Buddhist Center my then-partner and others started with me in Saco, Maine, received the table when we moved to it in 1998, but then we sold that and we then moved the table and this community to Silver City, New Mexico, in 1999.

The table then followed my peripatetic existence as I lived in five different houses (and it lived on one patio) in Silver City before finding its way with me to Santa Rosa, CA, in late 2001.

There the table was in storage above my housemate’s garage for almost five years. In late 2005, the table happily came out to live with me in Sebastopol, CA, where I used it well for about 8 years.

In late 2013, I had to leave Sebastopol, so the table again went into storage until early 2014, when I moved to Hayward. The table didn’t fit into my little Cherryland house, so it lived outside (that is the way it became so weathered and needed your great craftspersonship to refinish and restore it!). Living alone and not knowing anyone in Hayward, it didn’t get much use but I knew it was there.

So, here we are. I gave the table to you! May you and your loved ones get to enjoy this well-used table in good health and happiness for another 30 years or more!

I’m CC’ing this to: the makers of the table (our friend, Bonnie Insull and my son’s father, Christopher [please forward this, Christopher, to Bonnie]); our son, Merlyn; my mom and some friends and family who lived with and/or enjoyed the use of this table many times with us: they will also be made happy by this news!

I feel much better about leaving it “behind” knowing it’s in such good hands! I love this whole story, so I’m posting it on my blog, with your photos and others I have. http://www.sallyember.com/blog The story will appear Monday, 8/18.

PHOTOS of the Table

Before and After Refinishing, 2014 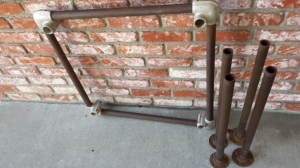 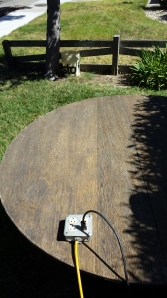 Featuring wondrous writings and phabulous photos. It's probably quite nice if you're feeling a bit down.