Part I: Science Alert, Serious Wonder and Cosmos Up

I should have been a research scientist. I love science. I’m extremely intelligent, determined, creative, and organized. I coulda been a contenda for a Nobel prize. That’s my story and I’m stickin’ to it.

Why am I not a scientist? I had a series of misogynistic (one of my teachers hated the four girls in my advanced science class so much he would pith [paralyze] the frogs by holding them in the air directly in front of one of us so that each frog would urinate on our blouses), anti-Semitic (another one wore his “John Birch Society” pin to school every day, displayed prominently on his lapel; there were three girls in my class and he insulted each of us daily), incompetent (in an lab accident at his “real” job, this poor man had lost most of his sight and drive and spent each class time mostly ignoring all of us) and otherwise horrible science teachers in 8th, 9th, and 10th grades.

With better teachers in those critical years, my life could have turned out very differently. Those terrible teachers turned me so far off science I only took one more “hard” science course (because it was required, in undergraduate college), despite many more years of education, through getting a doctorate.

As an adult, I became enthralled with quantum physics, health/anatomy, nutrition, child development/learning and the multiverse/astrophysics, so I read. A lot. I also watch documentaries. I am not even close to understanding some of the physics stuff, but the rest I got quite adept at utilizing. To “keep up,” I subscribe to many science-oriented blogs and curation sites.

My favorites are: Science Alert, Serious Wonder and Cosmos Up. I will excerpt from some of the “best of the best” of what I’ve recently perused. Part I is all from Science Alert.

Astrophysics and Quantum Physics/Mechanics
19 Jan 2015 http://goo.gl/TRtzJD
“For the first time, scientists in Australia have detected a gigantic burst of radio waves from outside our galaxy in real time. Called blitzars [also known as ‘fast radio bursts’ (FRB’s)], these bursts generate as much energy as the Sun does in a day, but they do it in mere milliseconds….The source of these ‘blitzars’ has so far remained a mystery….[T]hey’ve calculated the blitzar to be up to 5.5 billion light-years away from Earth.”

22 Jan 2015 http://goo.gl/v6Q8S4
“Researchers have found that have found that quantum mechanics can cause more than two optical systems to become entangled, potentially across large distances….[Q]uantum entanglement states that two particles can be implicitly linked and can seemingly influence each other no matter how far apart they are….[Q]uantum entanglement exists and forms the basis of teleportation and quantum cryptography. [In 2014], researchers from the University of Geneva managed to teleport a photon across a distance 25 kilometres….[This new experiment] provides an important step towards validation of mesoscopic quantum mechanics. Mesoscopic refers to the discipline of physics that deals with matter in between micro and macroscopic.”

10 Feb 2015 http://goo.gl/v9nm44
“New model suggests the Big Bang never occurred. Instead, the Universe has simply been going forever….A new quantum equation suggests that the Universe has no beginning or end, and it could also account for dark matter and dark energy.”

05 Apr 2015 http://goo.gl/BAKoZa
“The LHC [Large Hadron Collider]…the monstrous underground atom smasher that hurls particles at near light speed, has been restarted….Here’s how it could change physics forever! ”
“The hunt for dark matter is on.”
These new LHC experiments may also resolve as-yet-unanswered questions regarding supersymmetry, antimatter, gravity and dark energy as well!

08 Apr 2015 http://goo.gl/i8yQw4
“NASA’s chief scientist predicts we’ll find signs of alien life by 2025: ‘I think we’re going to have strong indications of life beyond Earth within a decade, and I think we’re going to have definitive evidence within 20 to 30 years,’ NASA chief scientist, Ellen Stofan…
“‘It’s definitely not an if, it’s a when,’ said Jeffery Newmark, NASA’s interim director of heliophysics….
“‘[O]bservations by NASA’s Kepler space telescope suggest that nearly every star in the sky hosts planets – and many of these worlds may be habitable,’ says Mike Wall at Space.com.”

16 Apr 2015 http://goo.gl/jdGFtQ
“Big news: Dark matter may not be as dark as we originally thought. Astronomers have found the first evidence that dark matter interacts with forces other than gravity.”

Child Development/Learning
05 Jan 2015 http://goo.gl/5POY6W
“If you want to sure up your child’s communication and problem-solving skills, chatting…to your baby about nothing in particular while you’re getting ready or doing work around the house…can be even more important than reading to them, new research suggests….[R]eading is great for young kids, but… on its own, it’s not enough to shore up their cognitive development.”

“Is it a male, or female? This unusual butterfly, apparently, couldn’t decide on its sex, resulting in beautiful and starkly different sets of wings….[I]t was a Common Archduke (Lexias pardalis) butterfly, with a condition known as bilateral gynandromorphy…[which] also been reported in crustaceans, such as lobsters, as well as in birds….”

23 Mar 2015 http://goo.gl/aQyTet
“Scientists have found a drug that makes people more compassionate. It turns out altering people’s brain chemistry can stop them from being selfish jerks….The drug, called tolcapone, prolongs the effect of dopamine in the prefrontal cortex of the brain, a region involved in the regulation of complex thought and our emotions. And early tests suggest that it encourages people who take it to be more fair-minded when it comes to money.” I posit the biological bases for better or worse humans, particularly regarding behavior and selfishness, in my sci-fi ebooks, The Spanners Series.

09 Apr 2015 http://goo.gl/ED8UKh
“Brain ‘gender’ is more fluid than originally thought, research reveals….[C]ontinual Dnmt [DNA methyltransferase (Dnmt), an enzyme that usually silences certain genes] exposure is necessary throughout development to ensure that a brain turns female.”
“Scientists have managed to neurologically switch newborn rats from female to male….Not only did their behaviour change dramatically, but the rats’ brains also structurally transformed.”
In the 1990s, I conducted my doctoral research and wrote my dissertation on the mutability of both gender and sexual orientation identities with the factors of interpersonal safety and connection being pivotal in how frequently, fluidly and diversely each individual’s identities might fluctuate, inventing a term for this contextualized fluctuation: differential authenticity. http://goo.gl/IOcCWJ
“‘”It was thought that once established, sexual differentiation could not be undone,’ Nugent told PBS. ‘Our work shows that sex differences in brain and behaviour are epigenetically regulated, meaning that sex differences are not hardwired in our DNA but programmed during development.'”
I would add: and identities could change throughout life, regulated by circumstances and experiences.

21 May 2015 http://goo.gl/oSpB7e
“Octopuses are able to ‘see’ with their skin, new research finds….[T]he same kind of skin perception might be happening in other cephalopods, too. In other words, these creatures can feel changes in light as well as see them.”
Cephalopods are featuredin my sci-fi ebooks, The Spanners Series.

Health and Nutrition
05 Feb 2015 http://goo.gl/RFcvRZ and https://goo.gl/2HhO4z [with two videos from ASAP Science]
“Want to know how to decrease your odds of developing a cold by 58.8 percent, and if you do get one, how to shave 1.5 days off the length of it? The latest episode of AsapSCIENCE has got all the – scientifically approved – answers.” The two accompanying videos provide tips and advice and then debunk 6 common myths about how to behave/what to do/not do/eat/not eat when getting sick or already sick with a cold.

18 Mar 2015 http://goo.gl/iU4jW4
“The longer you’re breastfed, the higher your IQ and adult earnings, study suggests, but not too long, or the benefits become disadvantages….And the difference was pretty huge. If a child had been breastfed for an entire year, they scored on average four more IQ points, had almost another year of formal education, and earned an extra 341 reais a month – which is about about a third more than the average income level in Brazil – than those who had breastfed for less than a month. But beyond 12 months, and the benefits in later life dropped off significantly – in adulthood, these people were on average poorer, and less educated.”

08 April 2015 http://goo.gl/1ImN59
“Amazing chart shows the planet’s longest-living animals. See how your puny human lifespan compares.” Humans don’t even make the top 10! The longest-living (an ocean quahog [an edible clam, pronounced in Massachusetts, USA, “co-hog”] exists for over 400 years! Eight of the top 10 longest-lived animals are all sea-dwelling creatures; the other two are land tortoises. I guess living on land shortens our lifespan considerably. Humans should have stayed in the sea. 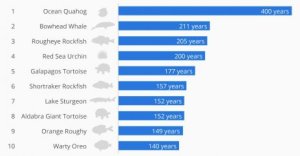 After that, look for Part III in late July, info from Cosmos Up.

4 thoughts on “Part I: Science Alert, Serious Wonder and Cosmos Up”