It is estimated that 1 out of every 8 USA adults has 4 or more #ACEs (Adverse #Childhood Experiences); MOST people have at least one out of 10 ACEs. “An ACE score is a tally of different types of #abuse, #neglect, and other hallmarks of a rough childhood. According to the Adverse Childhood Experiences study, the rougher your childhood, the higher your score is likely to be and the higher your risk for later #health problems,” including #cancer, #hepatitis, #heart disease, #diabetes, #hypertension, mental illness, frequent sicknesses of other kinds (e.g., “auto”-immune diseases), COPD (obstructive breathing problems), #addictions and #allergies, and many other problems.

These effects are due to the bodies’ stress response system’s being on overload, chronically and continuously (adrenalin, cortisol), which can screw up one’s immune system. The symptoms can show up immediately (childhood #asthma, skin #rashes, #ADHD and other “behavior” issues, including #eating disorders) and throughout one’s life, especially after age 40.

Children who live with/are exposed to conditions that put them under extreme #stress, repeatedly, have our brain structures altered forever, developing abnormal #hormonal and #immune systems, and affecting the ways one’s DNA is read and transferred (so, ACEs influence current AND future generations).

More facts and anecdotes are in this podcast, Hardwired, including info about the genetic connection to personality traits and other significant science about our biology’s and environment’s interdependent influences. Listen to that and more here–the same page as other archived shows is linked to: http://www.npr.org/programs/ted-radio-hour/archive 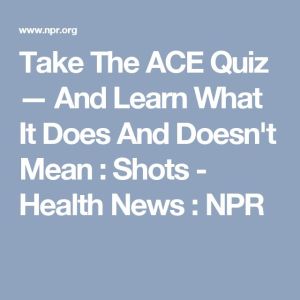 Unsurprisingly, my health has been “compromised” or difficult all my life. Oddly, though, I consider myself “a healthy person with particular problems that are /have been mostly under control,” mostly because they haven’t completely prevented me from many types of success.. Some problems have gotten worse after I suffered a TBI/concussion 3.5 years ago (which we know now also adversely affects one’s immune system, among other consequences. I have many blog posts about this in 2014 – 2015, at http://www.sallyember.com/blog). Some ongoing health issues have been worsening with age (I am well over 40). I have, however, never been addicted to anything even though that “runs in my family.”

The majority of the people who have scored over 7 out of 10 ACEs have been/are still incarcerated, living with severe mental or physical illnesses, or are already dead by my age. I am one of the few luckier ones who isn’t in the worst situations.

This “luck” is probably due to my having had many positive conditions, some self-selected:

For more information about resources and prevention as well as the original research on ACEs, visit the USA’s CDC (Center for Disease Control)’s website: https://www.cdc.gov/violenceprevention/acestudy/index.html