I got mad the other day after reading yet another falsified story about plastics in food and beverages due to packaging and container use, riddled with untruths and misleading information about food and water safety. I have hereby gathered facts to post. Follow any of the links given for the infographics or articles if you want to know more.

Are There ANY Plastics that are “Better” than Others?

This article claims that there are “Safe Plastics” which they describe as:
“Any plastic item marked with a 1, 2, 4, or 5 is not known to have carcinogenic tendencies or disrupt the endocrine system. Specifically, these plastics are called PET, PETE, HDPE, LDPE, and polypropylene. This generally includes items like drink bottles, containers that foods like margarine and yogurt might come in, and milk jugs.”

Personally, given the abysmal track record of the USA’s FDA (Food and Drug Administration), I wouldn’t trust ANY food or drink that is packaged in plastics. I hope they do away with plastic for food/beverage packaging all together very soon. Meanwhile, there are some plastics that are apparently not as awful as others. That’s the best we can say at this time.

image from “What Kind of Plastic Are You Eating Out of?” http://dailyhealthpost.com/what-kind-of-plastic-are-you-eating-out-of/

I found that The Sleuth Journal is reliable. Below is an informative, well-researched article with this and other great infographics, a video, and more.

BPA is Even Worse for Babies and Girls/Adult Females

Common Folk is another reliable source for information. Many European countries are so far ahead of the USA in understanding and refusing to tolerate chemical toxicity and GMO (Genetically Modified Organisms) in their food, agriculture and beverages. We should all learn from and imitate what they’re doing. Avoiding/reducing endocrine disruptors, especially because of their adverse effects on babies and females, is just one of the many areas the EU folks are smarter about than the USA.

image from “LIVING WITHOUT PACKAGING | Common Folk,” http://commonfolk.eu/plasticfacts/, BPA is a estrogenic plastic by-product used in the manufacture of polycarbonate plastics. It can leach into food or drinks …”

What can we do NOW? Get Better Informed

Another good source of information is Renegade Health. This article, about the ways plastic gets into food more readily when the food is heated or already hot, should inspire you to throw out your plastic wrap and plastic containers forever (I hope).

image from “Your Health On Plastics: Endocrine Disruptors in Your Body…” http://renegadehealth.com/blog/2014/03/28/your-health-on-plastics-endocrine-disruptors-in-your-body-the-environment, “How much BPA leaches from these products into food and water depend on the temperature of the liquid or bottle, as when heated in a microwave oven.”

Some of this article’s claims, collected by a blogger, below, are not accurate. I checked Snopes.com and included rebuttals of the incorrect claims below it. But the rest of the article is factual and important. DO get rid of your PVC shower curtain!

How to Avoid BPA

Great info in the articles and their infographics for the sections, below, about what steps we can take right now and in the future to remove BPA from our lives. 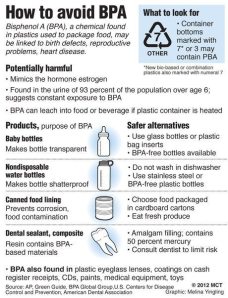 image from “Eco-novice: Going Green Gradually: Eat Less Plastic,” http://www.eco-novice.com/2011/04/eat-less-plastic.html, “Fatty, salty and acidic foods are the most likely to experience plastic leaching. One study found the most significant amounts of BPA in canned chicken soup…”

image from “Bisphenol A (BPA) – Diabetes and the Environment,” http://www.diabetesandenvironment.org/home/contam/bpa “BPA is often found in the lining of cans, and can leach out into the food stored in these cans. It also can be absorbed through the skin…”

Buy/Put Beverages in Glass, Stainless Steel or other BPA-Free Containers:

There are safe, easy to find (now), and inexpensive alternatives, especially for carrying water, storing food, reheating it in microwaves, and all the rest. Check out these tips/hints, below, and get busy!

image from “Health – Part 4,” http://www.bottlesupglass.com/category/health-2/page/4/ “Safety and Quality of Glass for Food and Beverage” 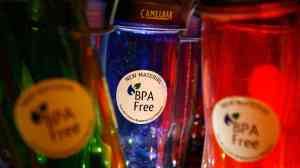 image from “Cut the Crap Series – 10 Fast and Easy Ways to Clean Up…” https://hygeahealthnut.wordpress.com/category/cut-the-crap-series-10-fast-and-easy-ways-to-clean-up-your-lifestyle/, “The federal Food and Drug Administration barred Bisphenol A (BPA) in baby bottles and children’s cups in June 2012 but it is still prevalent [in other containers]…”

Yes: the personal IS political! You want to make change, get involved. Some states and countries have been quite successful in eliminating BPA all together. What about where YOU live?