Speculative Fiction #Genres, According to one Jaded #Feminist (and two other, actual experts…) 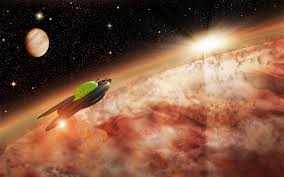 So, you don’t have to go by my jaded, biased, perhaps not entirely fair or accurate descriptions, below.

JUST MY OPINIONS, below.

image from a guest post by Julia Ember (no relation) on Jamie Kramer’s Books and Ladders blog, http://booksandladders.blogspot.com/2016/06/guestpost-unicorn-tracks-by-julia-ember.html

I told you I was jaded. I am not the only one, by any means. The following quote and analysis (please read entire article; link below) sums up my major complaints perfectly:

[Spec Fic is] not just about shiny, phallic rocket ships populated by deep-in-the-closet Aryan brethren conquering the Final Frontier, people. It’s about different futures, alternate realities, dangerous fantasies. You’d think such places, where dragons dwell, would be heavily populated with equally unusual people, but nope. Looks like everybody important there is white, male, anglophone and straight. Not to mention perfectly healthy physically and mentally.

—penned by Paula R. Stiles, “Diversity in Speculative Fiction,” on http://www.fantasy-magazine.com/non-fiction/articles/diversity-in-speculative-fiction/, from the Dec., 2016 (Issue 60) – People of Colo(u)r Destroy Fantasy! Special Issue [NOTE: “Fantasy Magazine has merged with its sister publication, Lightspeed, so this site will no longer be updated with new content. However, the fiction and interviews you would have found here at Fantasy will now be part of Lightspeed, so please sign up for our newsletter (sent out once or twice a month) to receive updates about the release of new issues of Lightspeed Magazine, news about the magazine, and more.”]
——-Lightspeed Magazine also published, starting in 2014, Queers Destroy… each of the subgenres (Fantasy, Horror, Fantasy), starting with Science-Fiction Special Issues, which you can find out about here: http://www.destroysf.com/queers/
And, on that same page, they have links to their POC [People of Color] Destroy… series of Special Issues for each subgenre (Fantasy, Horror, Fantasy)

—Women are at the forefront of these critiques and do them so well, I have so many to choose from. Here is another, from an interview conducted by Alexandra Alter with N. K. Jemisin [Jemisin was the the first African-American writer and the first woman of color to win a Hugo Award for “best novel” (others have won for short fiction)], “N. K. Jemisin on Diversity in Science-Fiction and Inspiration From Dreams,” published by the New York Times (!?) on https://www.nytimes.com/2016/08/25/books/n-k-jemisin-on-diversity-in-science-fiction-and-inspiration-from-dreams.html?_r=0
Jemisin says she “decided to focus on an oppressive society at the macro scale and what that society does to individuals” in her spec fic novels. Why? Because “a woman of color from an impoverished culture, being brought up among wealthy, privileged white people and having to cope and perform in ways that she has not been raised to do… was obviously drawn from some personal experiences. I do that in everything — explorations of power, identity and belonging.”

—Another great article, “Genrequeer,” by Theodore McCombs at http://www.fictionunbound.com/blog/2016/4/6/genrequeer, offers this excellent insight: “To make space for black achievement and transcendence, speculative fiction lets us change all the rules that should never have been rules in the first place.”

So, there is a lot of hope for increasing diversity, better representation of women and girls, more interesting stories and compelling ways to resolve conflicts than wars and violence in the Spec Fic genre and all its subgenres, with dozens of websites, groups and other resources to help us find them.

Here are some:
—The Black Science Fiction Society: http://www.blacksciencefictionsociety.com

—Latino Spec Fic: http://www.latinospeculativefiction.com/, which published Latin@ Rising: An Anthology of Latin@ Science Fiction and Fantasy, which “is the first anthology to bring together U.S. Latinos/as who are working in science fiction, fantasy, and other speculative genres”; edited by Matthew David Goodwin. 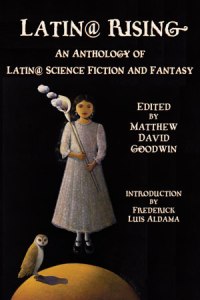 Cover of Latino@ Rising: An Anthology of Latin@ Science Fiction and Fantasy

—Check out writers in the sub-category of Afrofuturism, which is defined in Wikipedia: “Afrofuturism addresses themes and concerns of the African diaspora through a technoculture and science-fiction lens, encompassing a range of media and artists with a shared interest in envisioning black futures that stem from Afrodiasporic experiences.” https://en.wikipedia.org/wiki/Afrofuturism

—Tracy Mumford, about a year ago, wrote, in: “‘We want to hear new voices’: Diversity in sci-fi and fantasy” for https://www.mprnews.org/story/2016/04/05/books-diversity-in-sci-fi-and-fantasy [as part of The Thread newsletter, which I recommend you sign up for right now (on that page)], some great commentary about those topics.
This article also has a great recommended reading list, curated during and prior to 2015, mostly, of diverse writers’ work in spec fic.

—Queer Sci-Fi has so much to offer, now, and via so many sites. Here is one website that may list the majority of them and offers more resources, besides: https://queerscifi.com/

Weigh in, please. I’d love to have great discussions, here, about other elements of Spec Fic and intersectionality (the places that social identities overlap and in which we analyze privilege, oppression and efforts to effect change). What have I left out, got wrong, etc.?

I’d love to hear from you. I also welcome Guest Bloggers (see my site for Guidelines): http://www.sallyember.com/