Yes: I watch TV. Not reality shows, not zombie shows, not most half-hour sit coms and not late-night or daytime shows. But, prime time shows sometimes get my attention.

I have a few I keep watching (until they end or are cancelled; you can find most of those on my Pinterest board: http://www.pinterest.com/sallyember), but this post is about new shows.

Then, there are this Fall’s new shows. For a somewhat unbiased summary of each new show, check TV Guide: http://www.tvguide.com/special/fall-preview/new-shows.aspx

Since my mom and I are sampling some of the new shows, I kindly provide my /our recommendations and opinions, below.

#unexpectedlygreatTV: Red Band Society premiered this week and blew me away. My mom didn’t want to watch it since it features adolescents and she isn’t so interested (well, she is over 80…). But I have a soft spot for teens and decided to give it a try. It has Octavia Spencer and Dave Annabelle, it is produced by Steven Spielberg: how bad could it be?

#RedBandSociety is astonishingly excellent: script, acting, story, values, humor, poignancy, pathos, hope. It’s got it all. The promos (branding it as “‘The Breakfast Club’ in a hospital” does NOT do it justice) are not sufficient.

Give it a watch. I promise you’ll be pleasantly surprise. Bring tissues. BTW: I am not paid or compensated in any way for this review. I HATE Fox news, but Fox TV is often great.

Episode 2 was also good, but not as good as Episode 1, BTW. http://www.fox.com/red-band-society/﻿

#asgoodasexpectedTV: Madam Secretary was excellent. If you like great acting, scripting, suspense and twists in your political dramas, watch #MadamSecretary!

Kudos to Tea Leoni for picking, co-producing and starring in this intriguing show and to producer Barbara Hall for bringing another of her favorites from other shows into this one: great to see Tim Daly again. Enjoying the relationship between his character and Tea’s (married to each other).

Give this one a chance. http://www.cbs.com/shows/madam-secretary/

#reallylikethisshow Forever has an interesting premise, a good-to-excellent cast, and Sherlock-like mysteries/crimes to solve. Well-timed flashbacks give just enough to tantalize and inform slightly. What’s not to like?

Good to see Judd Hirsch, again (liked him in NUMBERS), and I like the dynamic between him and Ioan Gruffudd (the lead). Their actual relationship becomes apparent and is fascinating. Ioan Gruffudd and the police detective, Alana De La Garza, have great potential as well.

Also interesting to see one of the former interns from BONES working in another morgue-like setting (Joel David Moore) and Lorraine Toussaint in another role as a high-up police officer.

Give #Forever a whirl! Both the pilot and Episode 2 (playing in the same week for inexplicable reasons) were fun. http://abc.go.com/shows/forever

#fantasticTV Scorpion delivers, bigtime, especially if you like harrowing, fast-car and airplane antics, last-minute rescues and strange combinations of characters and plot. I like the “true-story” basis, with the backstory and complicated relationship between the Robert Patrick character (loved his irascible self on the X-FILES and his odd-ball, shapeshifting father on TRUE BLOOD, among other roles) and one of the leads,
Elyes Gabel.

Great to see Katherine McPhee in a non-singing, maternal-figure role and getting to play an action heroine as well. So far, so great! Had some great actors in bit parts for the Pilot which bodes well for future episodes.

Plus, the co-producers/exec producers is like a who’s who of film and TV producers that spans SCRUBS to STAR TREK to THE AMAZING SPIDERMAN to FAST & FURIOUS. Unique plot and effects combos can come from that crew!

If you liked and miss TOUCH, ALPHAS, SNEAKERS (film), and/or other ensemble cast of misfits shows in which they each showcase their talents/skills and solve problems/crimes and save lives, #Scorpion is for you. http://www.cbs.com/shows/scorpion/

#ShondaRhimesdoesitagainTV I predict that Shonda Rhimes has another hit on her hands with How To Get Away with Murder. Strong female leads, especially African-Americans, are her specialty: THANKS for those, Shonda: great storylines, interesting supporting characters, fascinating peeks into medicine, politics, and now, law. Throw in parenting, marriage, college/graduate school, small business dynamics and sex and you can see the formula but it doesn’t feel formulaic at all.

I like the writing, by Peter Nowalk. Viola Davis was provided a nuanced, deeply troubled character to play: a brilliant role that Davis plays to perfection. Good to see [a very much blonder and thinner (why?)] Liza Weil (loved her in Gilmore Girl, among other series and guest appearances), Alfie Enoch (from Harry Potter movies, now all grown up and calling himself Alfred) again along with many surprise “new” and not-overused faces in this diverse cast.

#triteandprobablycancelledTV The Mysteries of Laura, with Debra Messing, should have been better. Instead, the script was predicatable and trite, many of the fine actors were wasted, there were too many car chase sequences, and her single-mom-as-crack-detective is not credible, if only because she keeps leaving her NOT pre-school (but billed as such) twin hellion boys with random staff and who knows whom to race off to solve crimes. Sure.

And no one predicted (SPOILER ALERT) that her soon-to-be-ex is her new boss. Right.

Messing looks great and has wonderful acting chops but is wasted in this travesty of a cop show. Give it a miss.

I did watch Episode 2, just so no one could say I made a hasty judgment. It was marginally better than Episode 1, but only in that they kept the fake pre-school-aged kids mostly out of it. Otherwise, The Mysteries of Laura is now is a parody of itself, cliches abounding. Too bad.

#beentheredonethatbetterthanthisTV Gotham was disappointing in almost every way. First of all, do the writers not understand anachronisms? E.g.:

Next, why is the character of Alfred suddenly more Australian than British? Was that an accident or are the writers that ignorant of the original Batman story?

Finally, the story was improbably, boring, and untrue to the origins in too many other ways. Whenever any TV show or film spends a lot of time in “chases” or creepy entrances, we know they are short on plot and low on in-depth characterization.

Too bad. The original story and premise would have made great TV. Oh, wait; they already DID movies and a TV show about Batman. http://www.fox.com/gotham/

#anotherdisappointingspinoffTV NCIS New Orleans is not only disappointing but completely unnecessary. There was not one original moment in the entire first Episode of the series even though NCIS and NCIS Los Angelesgave this series a running start and even had many of the characters and the setting pre-trialed last year on NCIS.

What a waste of the many talents of Scott Bakula (he wasn’t even playing the piano live in the jazz music scene!), C.C.H. Pounder and the rest of the cast, writers, crew and director. Too bad. No wonder they don’t look happy in this promo shot… 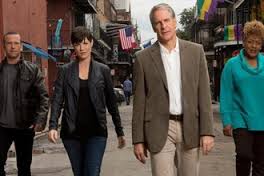 Even staunch fans of NCIS‘ other two shows, like my mom, didn’t like it. She and I agreed that it was BORING.

I give it a half season at best. #NCISNO is a no-go. http://www.cbs.com/shows/ncis-new-orleans/