[All three posts in this series have the same introduction, but I choose info from each of the four science compilation sites separately for each post. This post focuses on gleanings from Cosmos Up]

INTRO: I should have been a research scientist. I love science. I’m extremely intelligent, determined, creative, and organized. I coulda been a contenda for a Nobel prize. That’s my story and I’m stickin’ to it.

Why am I not a scientist? I had a series of misogynistic (one of my teachers hated the four girls in my advanced science class so much he would pith [paralyze] the frogs by holding them in the air directly in front of one of us so that each frog would urinate on our blouses), anti-Semitic (another one wore his “John Birch Society” pin to school every day, displayed prominently on his lapel; there were three girls in my class and he insulted each of us daily), incompetent (in an lab accident at his “real” job, this poor man had lost most of his sight and drive and spent each class time mostly ignoring all of us) and otherwise horrible science teachers in 8th, 9th, and 10th grades.

With better teachers in those critical years, my life could have turned out very differently. Those terrible teachers turned me so far off science I only took one more “hard” science course (because it was required, in undergraduate college), despite many more years of education, through getting a doctorate.

As an adult, I became enthralled with quantum physics, health/anatomy, nutrition, child development/learning and the multiverse/astrophysics, so I read. A lot. I also watch documentaries. I am not even close to understanding some of the physics stuff, but the rest I got quite adept at utilizing. To “keep up,” I subscribe to many science-oriented blogs and curation sites.

My favorites are: Science Alert, Serious Wonder, Brain Pickings Weekly and Cosmos Up. I will excerpt from some of the “best of the best” of what I’ve recently perused.

Part III is all from Cosmos Up, which means this month’s offerings are all astronomical! I hope you enjoy! Go subscribe!

Astrophysics and Quantum Physics/Mechanics
1. Jan 11, 2015, “NASA Reveals Three Amazing Travel Posters for Earth-Like Planets”
http://goo.gl/gfZgB1
“NASA has marked the discovery of potentially habitable worlds by its Kepler space observatory with a poster series imagining the ‘out of this world’ holiday options they may one day offer. Drawing inspiration from travel billboards of the 20s, 30s and 40s, the posters are the brainchild of NASA visual strategists Joby Harris, David Delgado and Dan Goods.” 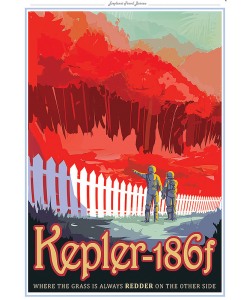 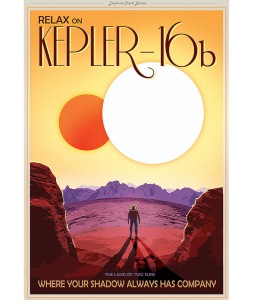 “These posters are even available online and can be downloaded for free via JPL’s website. There are additional exoplanet posters in the works, NASA said.”

MY VIEW: Or, they don’t use energy in the form we expect them to be using it, which is “high levels of mid-infrared radiation.” Why do earth-based scientists presume that signs of alien “intelligence” will be recognizable to humans from great distances or at all? We could be looking for “life” in all the wrong ways.

Look for Part I, published on June 1, which focused on info gathered by Alert.

Part II was published June 30, with info from Serious Wonder

Webseries, how did you live without it?